I'm really far behind on any sort updates, but I thought I would share a little tidbit of news from last year, that I totally forgot to post here:

In 2014 I was nominated for two Los Angeles Music Awards: Rock Album of The Year (Bridgework "Every Now And Then"), and Guitarist of The Year.  I didn't win either.

However, I was the recipient of a Producer's Choice Award.  Originally they wanted to call it "Studio Album of The Year" but I had to explain to them that there was no studio.  I did it all myself.  So the "DIY Album of The Year" was born. 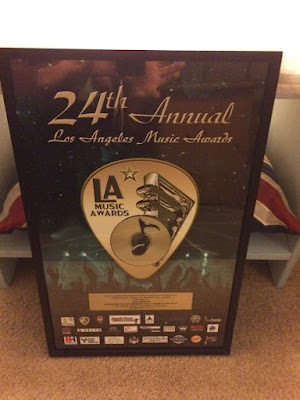 This now holds a place of honor on my bathroom wall.